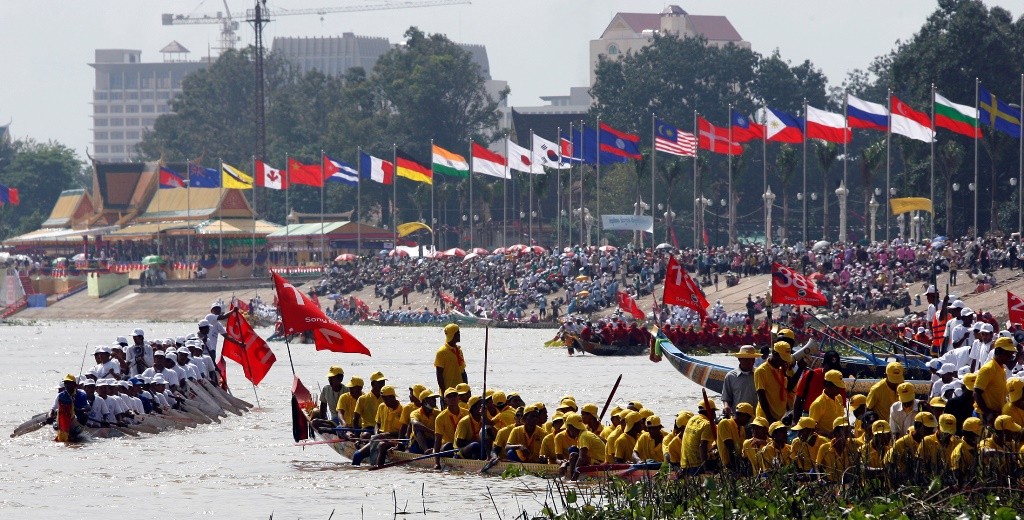 Update: 31 October 2017
For the people of Cambodia, the Water Festival or Bon Om Touk literally in Khmer (the Pirogue Racing Festival) is the most magnificent traditional festival.

For three days, local people and foreign tourists gather in the capital and other provinces like Siem Reap to celebrate the festival days and nights.

The water festival has had a rich background for so long and is the army training to attest for a battle. In the history, Khmer King always battled with enemies by sailing. So, the water festival is celebrated every year, in November, to honor the victory of Cambodian Naval forces in the reign of Cambodia’s greatestKing Jayavarman VII, during Angkor period of the 12th century. The sailing battle can also be seen through the carving walls of Bayon andBanteay Chhmar Temples.

The ceremony is also dedicated to express gratitude to the 3 Buddhist symbols, Gods, and holy thing which helps Cambodian people and agriculture field by praying for our lord for the happiness and sufficient rain for rice cultivation.

The ceremony lasts three days to provide opportunity for people to be part in competition that there were two types of boats from near and far of provinces, taking part in the races, the pirogue and the rowing boat. Each boat was manned by about thirty to forty men or women. The boat with a man or a woman dancing softly and gracefully to the rhythm of the drums on the bow as an encouragement to the rowers moved swiftly through the water.

During the nighttime at about seven o'clock the river was lit by jazzy illuminated boats, which floated slowly, and smoothly on the water's surface. Each of them was equipped with thousands of flashy neon lights arranged in different colorful, fancy patterns representing state institutions, ministries and services.

After a little time, multi-color fireworks were lit to entertain people and beautified the sky which give a beautiful reflection over the river. Some of people made loud noises as they were bursted into different shapes and colors in the sky under the clapped and cheered with joy each time at the sight of the fireworks.

To turn this history of the Water Festival into reality, don’t miss the opportunity to witness this festive event with our people at Siem Reap River (within 5-minute walking distance) while you are fortunately staying across the celebration period from 2-4 Nov, 2017.

Borei Angkor also joins this national event by having our own illuminated boat floating over the river of Siem Reap. Therefore, we invite you to sightsee it and experience the festivity.